The Creative People in Raleigh Are Trying to Kill Us, But We're Cool With It.

There are so many creative people in the Triangle, it blows my mind.  Every time I think that every restaurant or bar idea's been done and done again, someone comes up with a new idea.

Then, there's the people who came up with the idea of not just a food truck rodeo in downtown Durham, but a breakfast food truck rodeo, on a Friday morning.  Again, I know it's a simple, easy idea.  But it never would have crossed my mind.  It, too, is awesome.

That brings me to Bittersweet.

Since I read in Triangle Business Journal it was opening, I have wanted to go to Bittersweet, but I've been joking that all this creativity in the Triangle is killing me because I want to try it all--but no one needs that much dessert, beer, cake, craft beer, fancy food, etc.  It's on Martin Street in downtown Raleigh, right across from another of my favorite spots, The Mecca.  When you walk in, Bittersweet reminds you of a 30s or 40s diner:  dark wood, marble bar top, black and white tile.  Here's a shot down the bar: 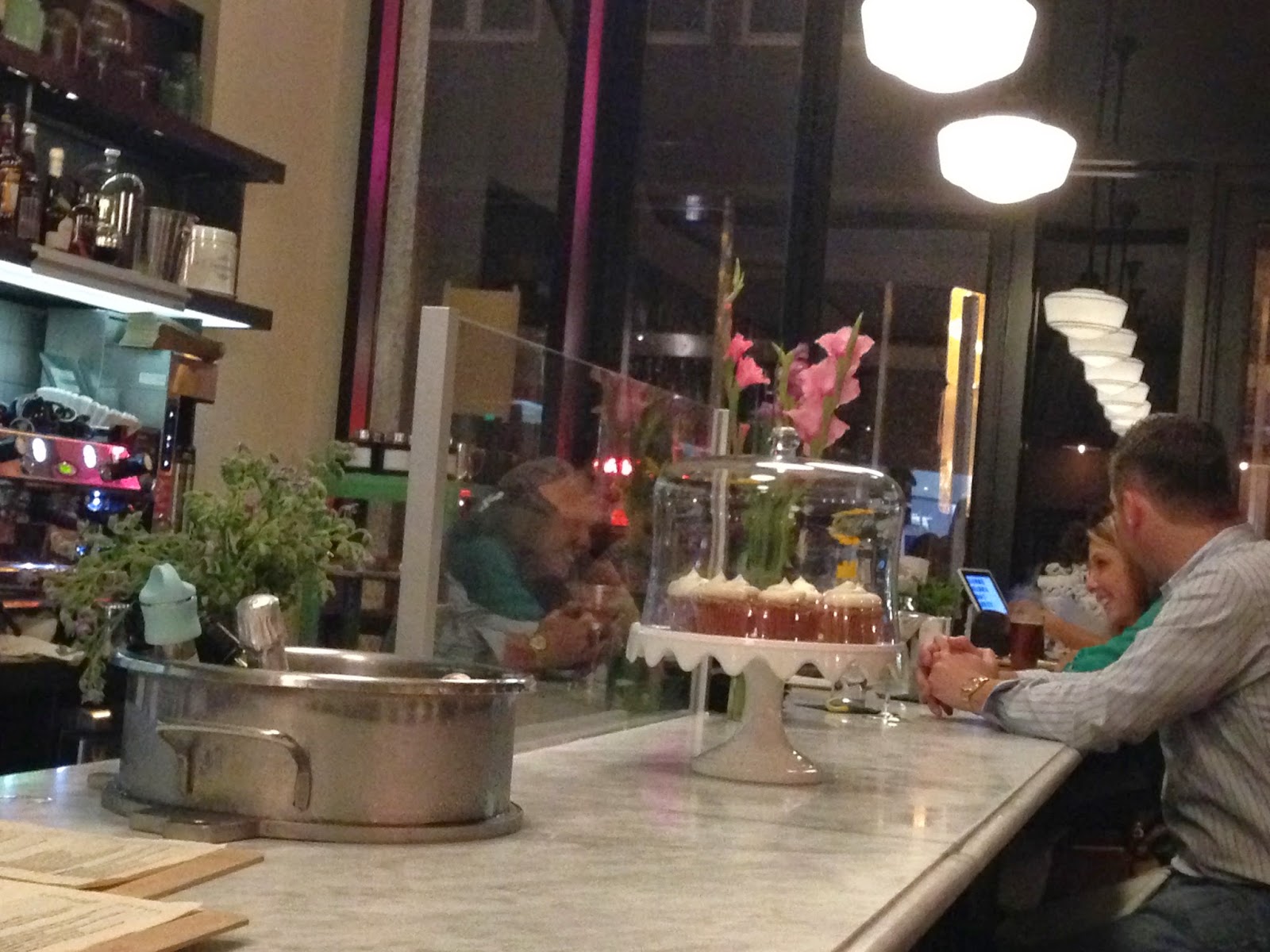 I also really loved how they set up the taps: 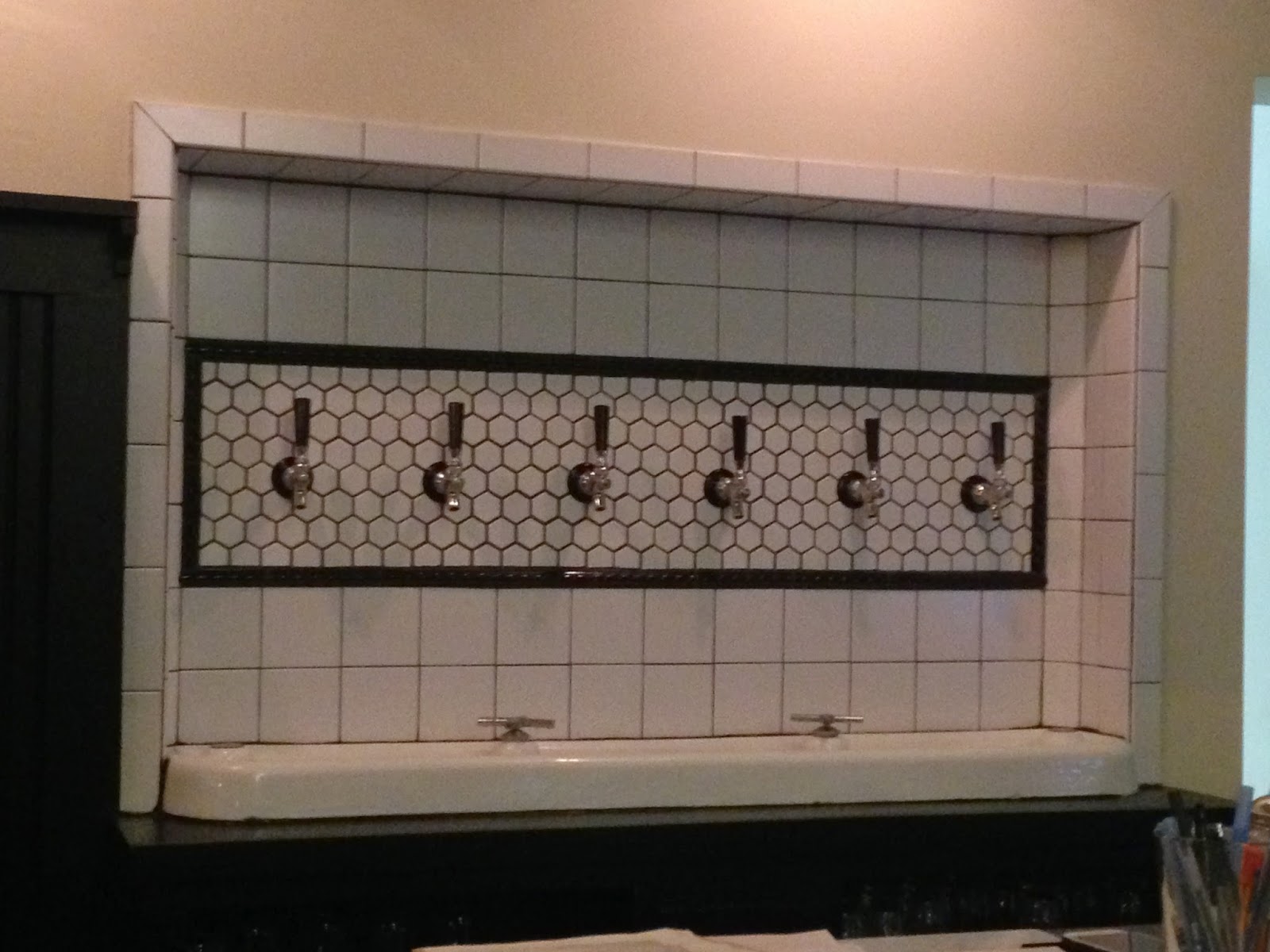 My husband and I took a seat at the bar and ordered amazing desserts--the Key Lime Tequila parfait with Cointreau whipped cream and an awesome tasting peach cobbler thing--all I know was that it had cinnamon-sugar doughnuts, maple ice cream, warm peaches and candied bacon on it.  The desserts are awesome and different, and the drinks were pretty great, too.

A peek at the menu: 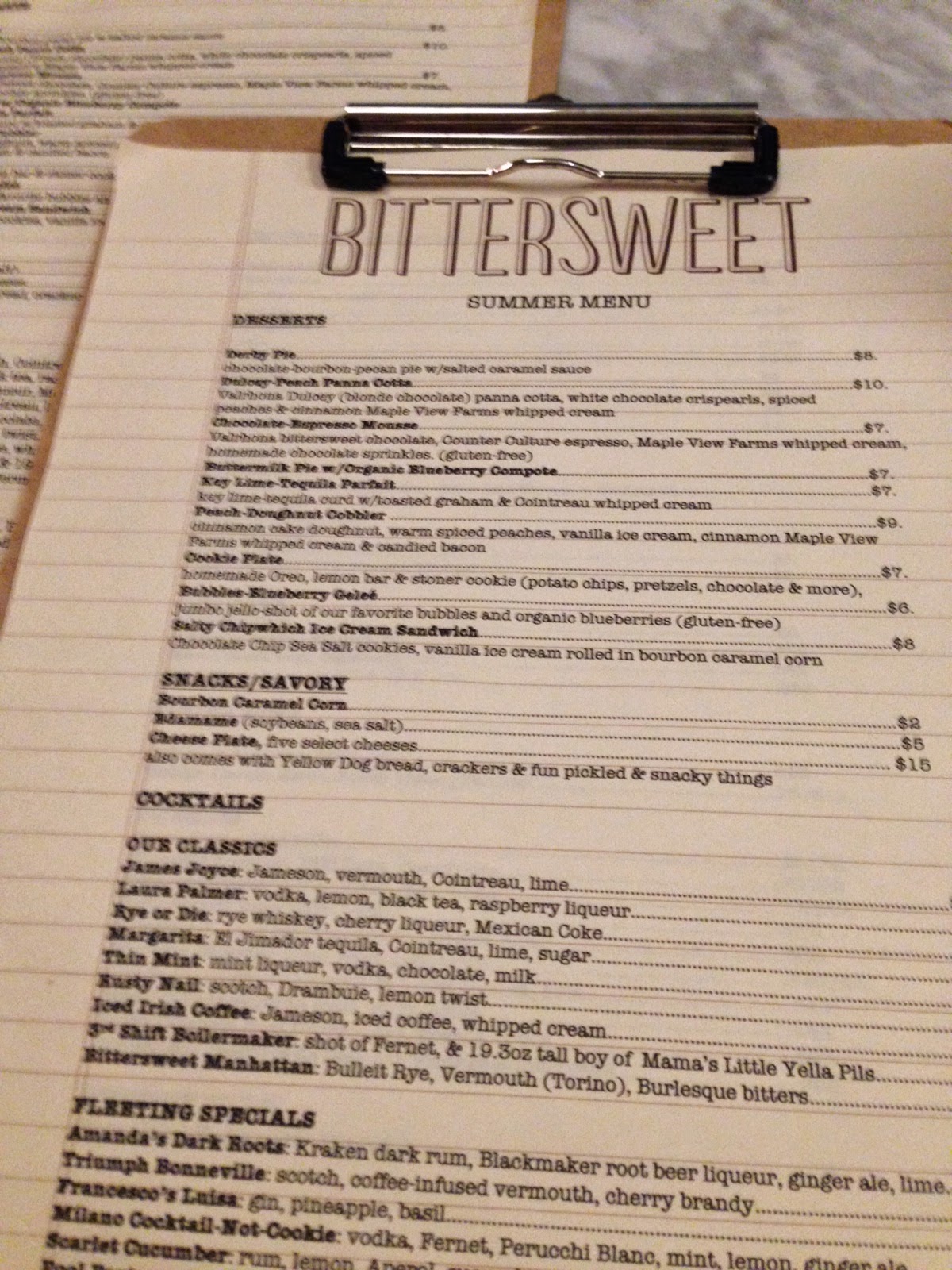 Our bartender was Louis, a young guy who knows a ton--he was clearly not just a bartender but a mixologist.  We struck up a conversation with him and learned that this Sunday night, Bittersweet is showing The Goonies on their big screen TV, and they're making themed drinks to go with it. And, here's where I'm going with the creativity thing--I would never think to do something like that, let alone make themed food and drink for it.  Louis was trying out the Chocolate Explosion.  Know that scene where Chunk eats all the Chocolate Explosion ice cream while locked in the freezer?  Well, Louis was trying to concoct a drink to go with that scene.  Other folks at Bittersweet were working on drinks, too, and (I think!) there will be themed food, too.  They'll be showing the movie behind Bruce Willis.  Yep, I know that sounds weird, but check this out--there's a big screen TV back there:

So, yeah.  Head to Bittersweet on Sunday night at 9.  Watch Goonies, eat dessert.  Mama Fratelli would be happy with that--we think.  And, even if you miss the movie, go after dinner one night.  It's yummy, and Louis is awesome--ask him about his Chocolate Explosion.